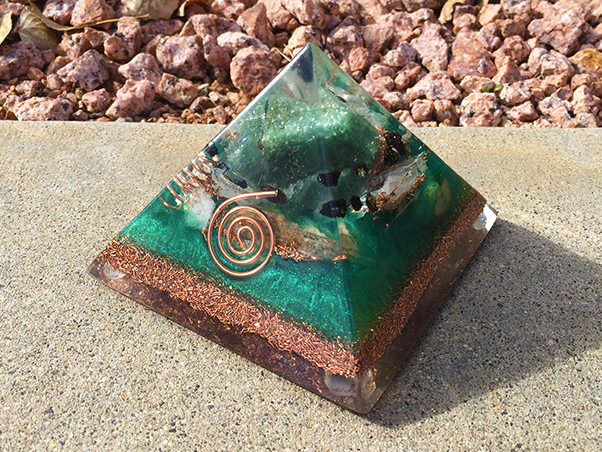 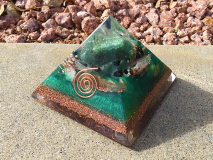 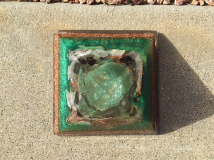 This beautiful Orgone pyramid contains a large Green Quartz. Green Quartz is a stone known for activating the Heart Chakra to protect against selfishness and controlling behaviors, and promote empathy and universal love to the benefit of the collective consciousness. Green Quartz's connection to the Heart Chakra also stimulates creativity to promote prosperity and success.

This pyramid contains copper shavings, one large Green Quartz, one terminated quartz point wrapped in a copper coil, selenite and black tourmaline, a blend of mica pigment powder, and a copper coil on the front. The pyramid base is 4 inches x 4 inches, and the height is 3 inches. The weight of the pyramid is 1 pound and 7 ounces (640g). The pyramid base also contains clear rubber grips.

I like to include general descriptions of the commonly-known metaphysical properties of crystals and stones used in many of my Orgone devices. That said, each of my devices have an intended primary function as Orgone and Scalar energy devices. For this reason I use the standard Orgone device recipe for each piece, regardless if they include additional, special crystals and stones, or other embellishments.