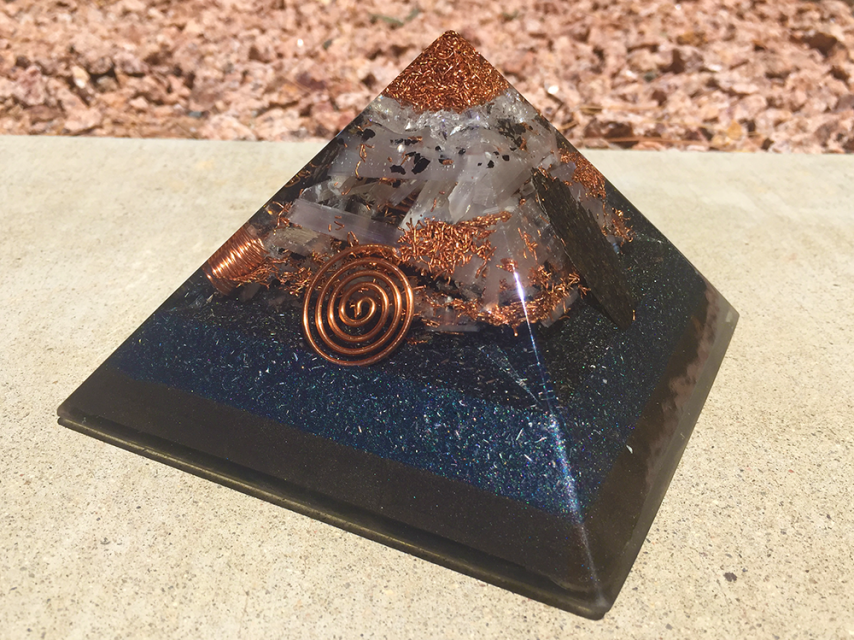 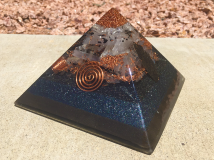 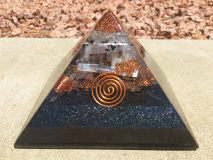 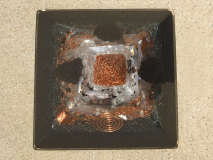 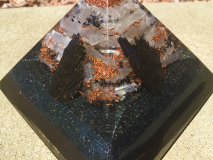 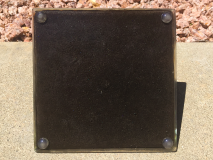 This Giza pyramid features three large Black Kyanite crystals, beautiful displayed on three sides. Black Kyanite is considered a powerful psychic stone and a favorite among energy healers for aiding in the manifestation of vision and clairvoyance. Known also as "witch's broom" due to its shape, it is often used to clean (or sweep) away unwanted energies, and release negative energy blockages. As a powerful grounding and root chakra stone, black Kyanite opens lines of communication to resolve conflict and misunderstanding, grounds and aligns all of the chakras during meditation, and transmits and amplifies high-vibratory frequencies and energies to enhance intuition and psychic thoughts.

This pyramid contains three large Black Kyanite crystals, one terminated quartz point wrapped in a copper coil, crushed quartz, selenite and black tourmaline, copper shavings, a blend of mica pigment powder, aluminum shavings, atomized steel powder, shungite, and a copper coil on the front. The pyramid base is 5.25 x 5.25 inches, and the height is 3.5 inches. The weight of the pyramid is 2 pounds and 6 ounces (1082g). The pyramid base also includes

I like to include general descriptions of the commonly-known metaphysical properties of crystals and stones used in many of my Orgone devices. That said, each of my devices have an intended primary function as Orgone and Scalar energy devices. For this reason I use the standard Orgone device recipe for each piece, regardless if they include additional special crystals and stones, or other embellishments.